A very interesting and intense day in Rome at the Edizioni Punctum studio finalizing the design of my book Ciociaria. Okay, almost finalizing as the we ran out of time, but we completed about 80% of the work and though the hardest parts of the design process. I have not been through this phase of the photobook design process, so a little bit of apprehension as to what was going to happen, but that turned out to be for naught, which is entirely due to the warm hospitality of Marco Delogu, photographer/publisher of Edizioni Punctum, and Leonardo Magrelli, the designer and computer wizard.

And in fact, the photobook design process was strikingly similar to my last edit of the book dummy that I completed in preparation for this meeting. The best part of this meeting is the collaboration, extra eyes and distance that Marco and Leonardo brought into the process. I think that one of the more difficult tasks for an artist, whether a photographer, painter or other medium, is to edit your own work. I can become very passionate about a photographic project, but then not objective enough to realize that a couple of wonderful photographs that I feel just gotta be included really look like shit when placed into a broader context. Thus one of my primary benefits and my desire to working with Marco and his team. Marco is not bashful about what he thinks will work or does not work and why, so that was also part of the learning experience for me.

The first phase was a review of the pairing of the photographs that I had developed with the book dummy. I had previously sent Marco a set of small JPEGs of the photographs and a mock-up of an earlier iteration of the book dummy, so the images were not entirely new to him. After the first pass, we culled out photographs that did not appear to be a great fit. Also initial decisions as to which photographs did work as a pair and which should stand on their own. This would end up being a repetative process through this book design; testing, tweaking, singling out and then reassemble again. We complete this on the table top, but then for the next phase to evaluate the sequencing, it was time to move out to the studio floor.

To evaluate the sequencing of the photographs, like I did for the book dummy earlier in SoCal, we laid out the photographs, with the first pair at the top left and then worked our way down to the last pair at the bottom of the stack. We started with my dummy sequence and then spent time looking and discussing what we were seeing and experiencing. At this time, we also made some adjustment to some of the pairs and I introduced my small stack of back up photographs that were culled out during my dummy development, for one last sanity check. Interestingly, three of these were reintroduced into the layout. It was at this point that Marco wanted to take a segway and select potential photographs for the book cover.

After a seesaw discussion, we narrowed it down to four images, one weak alternative, a medium possibility, and two front-runners, but a concern that one of these two finalist was perhaps bordering on a romantic cliché. This second place image had a great place inside the book, but perhaps not on the cover. So with that, Leonardo started to work his magic, bringing the JPEG of the primary candidate into InDesign and setting up about six iterations to test the location, size, font and color of the book’s title text. While Leonardo was working on the book cover options, Marco and I returned to the sequencing process. But first, a cafe, and while we were gone to a very friendly shop down the street , a slight breeze through the studio helped us with resorting the existing sequencing and providing a clean slate to work with.

The sequencing was more vexing and a challenge, as moving a pair or a single photograph to a new location required another re-balancing of the surrounding photographs as they played off each other. Marco’s solution was to focus on the initial six spreads of the book to bring the reader into the project and the last three spreads to create closure. Once these photographs seemed rather certain, then how did the subsequent photographs and spreads then capitalize on those, with more emphasis on the spreads following the lead in. At this point we then captured the sequence on paper for further reference using the file name I had provided for each photograph and it was time to start working with the software to digitize the layout.

By this time, Leonardo had the six book cover design alternatives complete and it was time to evaluate those. One of the alternatives was really cool and we agreed to tweak that concept. A little push here, a little shift there and it was looking really nice. So in the next couple of days, I should have a low res PDF to evaluate. That is so cool!  Also weird that this cover photograph was also one of my alternative photographs as a back up to another, but it floated easily to the top of the pile.

So this is where I left Leonardo and Marco, as time had run out. Later this week, Leonardo will load the low res JPEGs into the book template we had earlier agreed to and Marco was going to take another look and evaluation before sending me the PDF file for the book. Not bad for a session of book design work, eh?

And the list I have started for those interested in acquiring this book is starting to fill. nice. So let me know if you are interested in either the trade edition or the Limited Edition (book + print in slip cover).

Update: email me at: doug@douglasstockdale.com 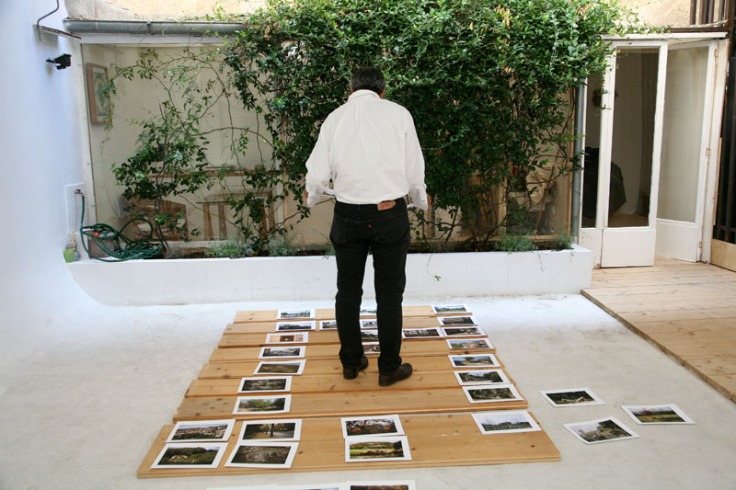 4 thoughts on “Ciociaria – designing the photobook”