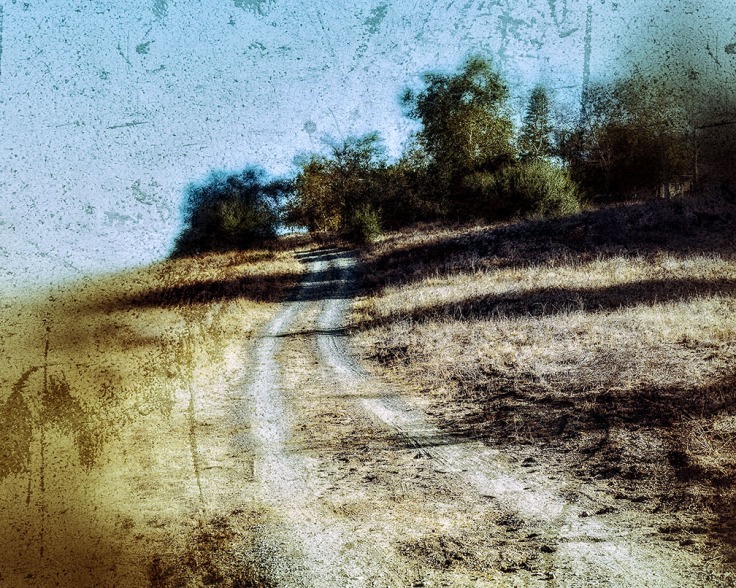 From time to time I am going to feature the evolving landscape of Trabuco Flats as I develop this book project. For most of my landscape photographs I pay close attention to any horizon lines as it seems that my photographs have a tendency to dip down just a tiny bit on the left side. I have been photographing like this for years, even when I know I might do it and try to pay close attention to the composition in the view-finder. It happens.

So when you see a slightly tipsy image like this you can bet I was trying to photograph a road that is meandering up a hill, which is indeed the case. I think the dirt road does provide sufficient visual clues in addition to the downward slope of the hill. FYI, I have always been uncomfortable with these kinds of photos which could imply that I did not get the composition right. This time I am feeling pretty good about this image.

I also notice that my broader landscape images like this one seem to do better on my social media like Instagram and Facebook that some of my tighter studies, such as my nasty Sacred datura flower that I just posted on here. Which could mean that the folks who follow me really enjoy my landscapes much better than the other stuff, or perhaps my other stuff just sucks.

For those who also have been following my Epson 4800 printer issue, it appears that I may have solved the printing issue due in large part to my friends at the Photo Exchange and Barry, a technical printer sales guy at Samy’s Camera in Santa Ana. Appears that the printing issue appears to be related to some declining paper suction that was not holding the printing paper near the print head nozzles at the end of the printing process. The paper was too heavy for the suction to hold the paper in place, thus falling away from the print head. Since the 4800 does not have an adjustment to increase the suction (one can decrease the suction), the fix was a slight delay in the Paper Feed Adjustment setting. The following two prints after making this adjustment unloaded a bunch of old ink crap on my prints, but subsequently the entire image was printed. Amazing what might accumulate over 13 years!

Equally nice is that I have a working fine art printer again, as my budget was very limited for the next few months to purchase a replacement printer. Yea!

While getting the printer working again, I also ran out of the Light Black ink. Oh well, but once the replacement ink arrives, I am back in the art business again.

3 thoughts on “Landscape of Trabuco Flats”