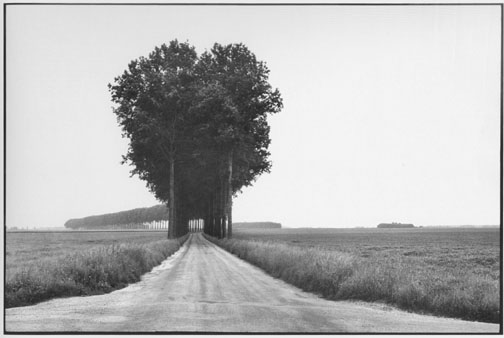 During a recent photographic image review on Stills, one landscape image brought up a reference to this photograph above by HCB. It is one of those images that is also similar to another photograph by Brett Weston, that I have always enjoyed. Something about that tree lined road that pulls me in. To be able to walk that road.

Which is probably why I was connecting so much with the tree lined roads in JiaShan and the region South of Shanghai. I know understand that this image was a latent image that I was carrying around and that when I saw the similar roads in China, I resonated like a tuning fork.

This visual/mental connection was enough to get me engaged, I began to look harder and see what it was about where I was standing that continued to connect with me. I went from the head (aha, I know this area from someplace before) to the heart, the emotional thing that was underlying & creating the connection that was now saying, “photograph me!”