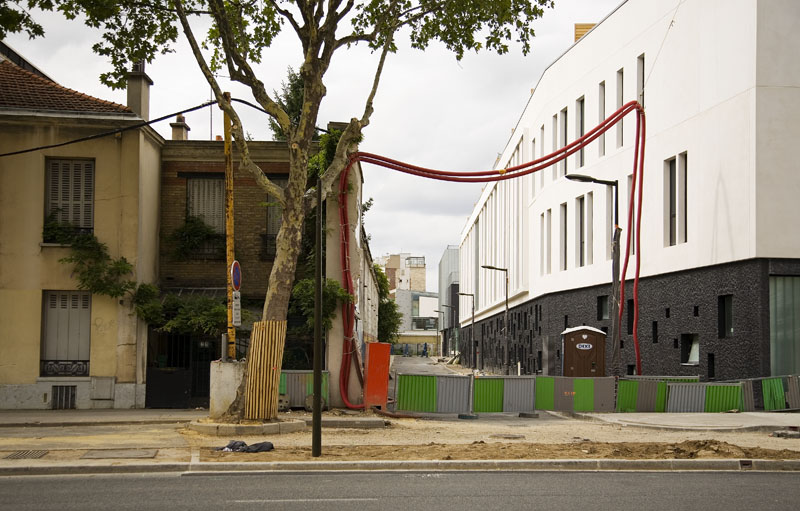 While en route to Parc St-Cloud, I was still wondering if this might be the route that Atget would have traveled to Parc St-Cloud? Did he walk or take a carriage? It is my guess that being of simple means, he might have walked this route.

What would Atget have seen and reacted to is a question that I continue to ponder. Yesterday I noted a small two-story brownstone that was in the “path of progress”. To the immediate left was already built a large auto mechanic busines that already seemes to dwarf this small row house.

Now the encroachment continues, with ruby tentacles reaching out in an attempt to ensnare this brownstone. The adjacent wall is a now remanent which conceded to a new passage-way to serve the looming contemporary building. Even the front tree has erected a protective boundary around its base, as it must be sensing the pending danger.

Would Atet realized that this Brownstone was about to become history, that it’s days were numbered and that again the modern city was steadily advancing? How might he have reacted to such a realization? Would this be cause to delay his anticipated visit to Parc St-Cloud this day? Or perhaps make a mental note to return at a much earlier hour to be able to photograph from the advantage point somewhere in the middle of the now busy Avenue Edouard Vailant? Could he take a chance that tomorrow this Brownstone maybe gone, vanishing into only fading memory?

It is a nondescript Brownstone, with a minimum of personality, without any fancy brickwork on its facade. But now there are fewer and fewer of these Brownstones, slowly shrinking from sight, until a realization that they have vanished and were replaced by towering apartment homes and office buildings. But even now the front of the building is encumbered by another power pole sitting on top of a short column of concrete. Perhaps the moment to clearly capture this facade may indeed have past, but giving cause to look about and find other Brownstones whose fate is also in unknown peril. To being photographing these relics before it is too late.  So I continue to wonder, what would Atget have decided to act upon?

BTW, I have now realized that Parc St-Cloud is located in St-Cloud and that we are no longer in Paris. During the days of Atget, it may have been able to sense that he had left Paris and was not into the outer edges and maybe in a more rural region. Today, this region near Paris is a constant parade of offices, apartment homes and industrial structures, much like Orange County, Los Angeles, Chicago etc, where the boundaries of one large city blurr as you cross into the adjacent cities and regions, such as Boulogne, which is located in between Paris and St-Cloud.