For Easter this year, the family headed to San Onofre State Park and down trail 6 to the beach for a picnic. Also an occasion to say a last goodby to Lucy, the kid’s dog for the past 14 years, who passed away in March.

Trail 6 is located at the edge of the Park adjacent to the Camp Pendleton Marine Corps Base, so this region of the beach is usually used a lot less. In fact it used to be a well known nude beach. On this day the weather was more like what we call  “June Gloom” with the overcast sky and coastal fog, air temperature in the low 60’s as was the water, but the water sure did seem a lot colder than that. The surf was not that large this day, but there was an occasion large set. Mostly well suited for short boarders than the long boarders. Thus no surprise seeing this long-boarder walking down the beach kinda looking like he’s calling it a day.

At the moment this a singular image, somewhat monochromatic and is not a part of any of my current projects or series. Just an interesting situation that I saw.

Update: After posting this and linking up the photograph and post to Facebook , I viewed this  post on my other monitor.  I then realized that I had made a tactical error. I had not set my PhotoShop monitor to my color calibration, thus the original image is a bit more washed out in the highlights than I had intended. So for grins, the image below was the original post, while the image above should appear closer to my intent, with a little more visual presence of the ocean. I also had a black and white version of this photograph in my original post, but I have decided that I prefer the color monochromatic version. 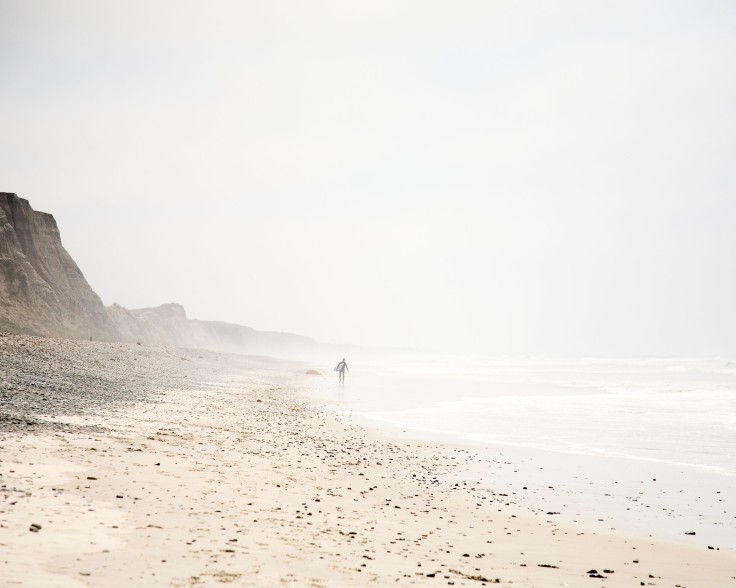