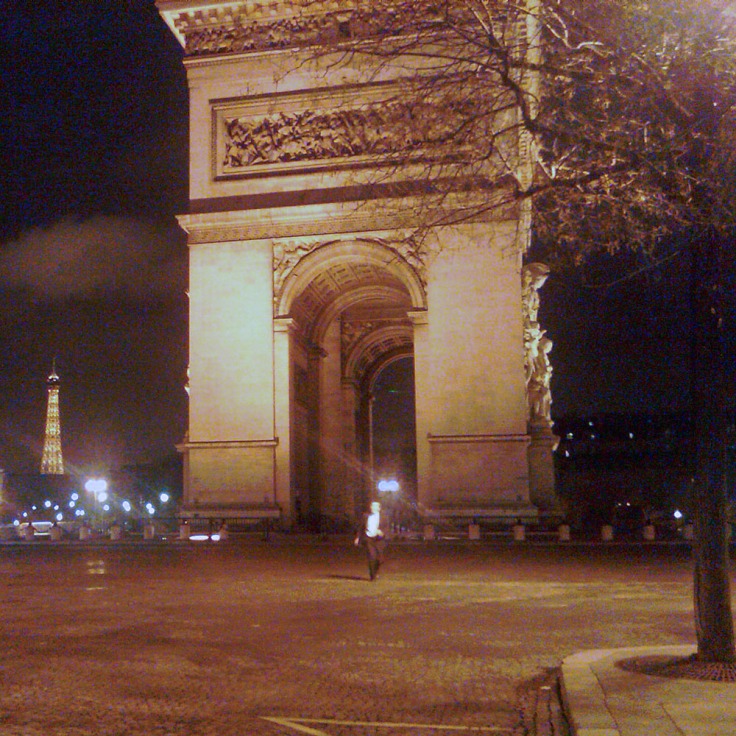 While looking through all of my Paris photographs after an inquiry earlier this month, I found this image that I have continued to find intriguing. I was in Paris on assignment and out to dinner with my friend Donovan when on the walk back to the hotel he asked that I photograph him with this classic Paris structure in the background. The only “camera” I was carrying with me at the moment was my Blackberry phone, which I obliged and even able to sneak into the image the lite-up Eiffel tower in the background. He thought that this was the best photo of him on location, every. He still mentions this about every time we get together. It’s really nice to create such a strong memory for someone.

I had purchased this Blackberry in 2010, which had a 3 Mp sensor and as far as I was concerned at time, an awful plastic lens, which was not that great for creating “quality” images. Now in retrospect I think it makes beautiful ambiguous images. As a night exposure goes, this is a very noisy image and I really can not make out Donovan’s features. Then a curse, now a blessing, as he has become every-man out on a night on the town in Paris. Of course if you know this spot, there is a lot of car traffic and I made him patiently hold his position until all of the traffic was out of the frame. He swears it was my clumsy attempt to kill him. Then a quick snap or two & done. Then some magic in photoshop on my return to the studio. Not too bad if I say so myself, so I have submitted this image for my little Paris portfolio.

Now I am thinking that I might try to get that Blackberry working again as a camera ;- )