It is now September, summer vacation as most of us know it (as a former Midwestern that is after Labor Day), the kids are back in school and looking forward to the Fall weather. I took a short break from blogging here after the publication and exhibition of my artist book Middle Ground. So a bit of a quick recap of what has been going on for the past month and a half (no moss growing on a rolling stone).

In July I was a portfolio Reviewer for Los Angeles Center of Photography’s 2018 EXPOSURES during which one of those I spent time with was Melissa Lazuka, who has been developing some very cool artist books. Subsequently after discussing the issues of how to create a larger edition size she made a decision to create her artist books as unique books (1 of 1), but in a series utilizing the same layout, her photographs, but different ephemeral materials. And she just sold her first one shortly after I reviewed “Song of the Cicadas” on The PhotoBook Journal. It is very nice now one of my favorite photobooks for 2018. So check it out!

In early August the photobook I have been designing for Christine Kaplan, On My Walk, was published and released during a UCLA Medical event in conjunction with Teen Cancer America for their Backyard Concert series fundraiser. (Also attended this concert, which included performances by Jewel, Van Morrison, Don McLean (American Pie, a long version, of course!), Ed Sheeran, including an impromptu duet by McLean and Sheeran, and Roger Daltry). Christine was working on her book with me through the LACP Mentorship program. 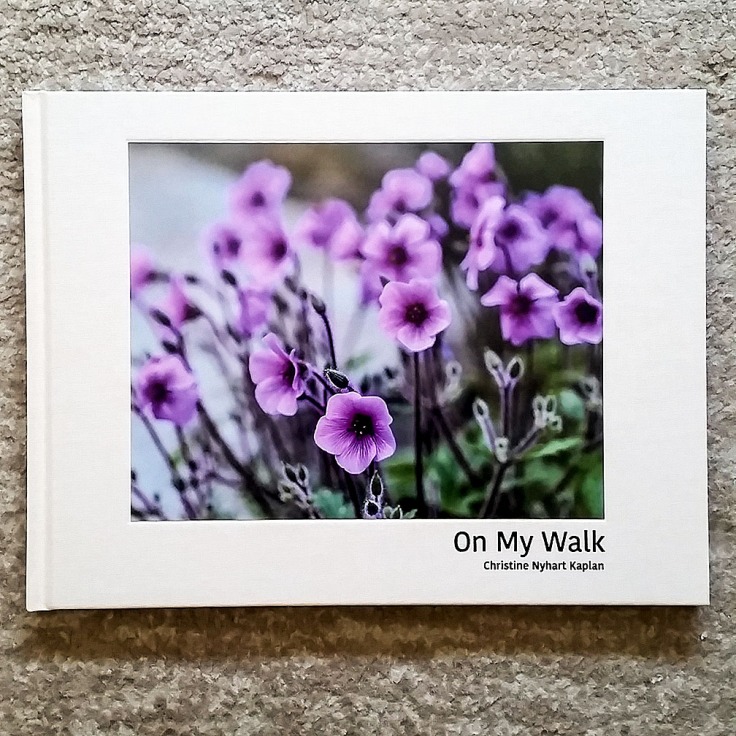 Christine Kaplan, On my Walk, copyright 2018

August was also the month that my little portable PC gave up the ghost and I made the transition back to using Mac’s again after 20+ years, opting for a 27″ iMac with most of the bells and whistles. Not a fan of the iMac bluetooth mouse, so that was switched out for a Logitech mouse which has been 100% reliable, which is more than I can say for the iMac mouse. I did lose a few things during this transition, but nice thing about using film, I just need to rescan the negatives.

Meanwhile I continued to develop my project Gardening for Ordnance while promoting my artist book Middle Ground. In the process of working on Gardening for Ordnance, I recently came across what the local O.C. Sheriff is calling a “shallow” grave. Not something I was looking for, but something that I found & reported. The Sheriff’s (about six of them showed up) stated that they will continue to investigate; don’t know who buried what and when. Also in touch with the crime desk of the local OC Register newspaper. Since I am not a photo-journalist, I will leave this to someone else to keep track of.

As a result of completing a book review of Tara Wray’s photobook “Too Tired for Sunshine“, I have been submitting some of my photographs from my Memory Pods project for her TooTired project on IG. My attempts to indirectly create a portrait of my mother and grandmother in the later stages of Alzheimer’s Disease during which they experience profound sadness, confusion, anger and depression appear to resonate with her readership. Thus I am returning to this body of work which I have not spent much time with this past year while working on the Middle Ground project. So expect to see a bit more from me about the Memory Pods project during the Fall.

Last, Gerhard (Gerry) Clausing and I have initiated a monthly on-line exhibition series for the Photographers Exchange, a local photographic group that Gerry and I edit the blog. He and I will take turns curating this monthly on-line exhibition (I am currently curating the Contemporary Landscape exhibition) and see how this develops as we consider what unmeet needs that we can address with this. Regretfully at the moment this is an internal event for members of the Exchange, while Gerry and I consider alternatives for this social media channel.