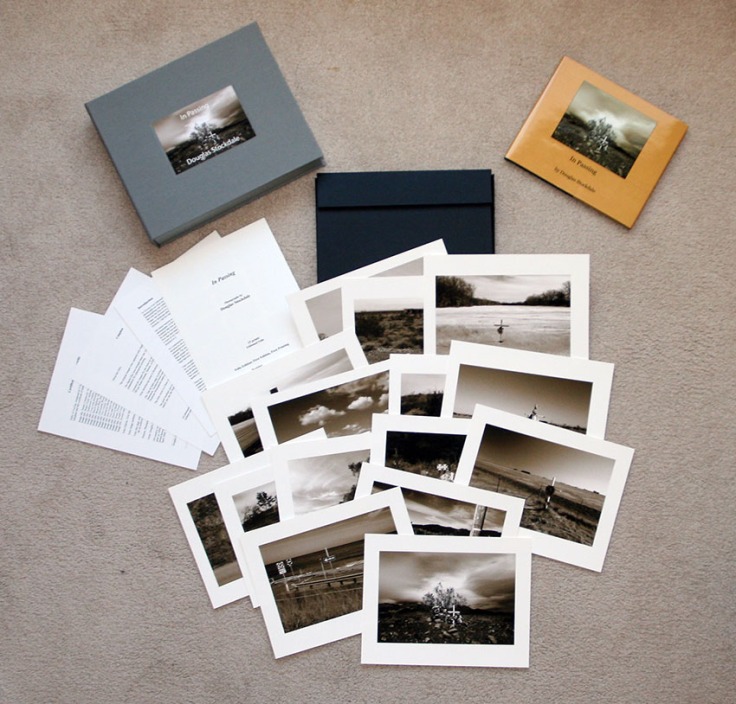 Seems like a number of things have been coming together this week.

First, as a result of publishing The Photo Book and linking a number of publishers and gallery bookstores to my journal, I now have an accepted gallery industry trade name for what I have been developing for In Passing, which is a “Special Edition“.

In the past, I was aware that these were called Limited Edition Portfolios, but when I added the Limited Edition hardcover book, well it just became a little complicated. From the advice of Laura Russel (23 Sandy Gallery, Portland), “keep it simple”. So now I have my first A/P completed for my Special Edition. nice.

So the In Passing Special Edition, shown above, will include the clamshell with the tipped in photo in the indent on the front cover, the Limited Edition hardcover book, the archival folder with the fifteen Limited Edition prints, a Cover page with image index on reverse, the Introduction, a Colophon and a Certificate of Authencity with my Chinese stamp affixed, all signed, numbered and dated. very nice.

Laura also agreed that my first “proof” for the In Passing Special Edition could very well be called a Trial Proof (T/P), which is the group photo above.  But again, keep it simple and have two Artist Proofs (A/P) instead of one and call the Moab Entrada paper the first A/P. After I work out the printing with the Harman paper and probably republish the hardcover book to reflect the changes, then I would develop the second A/P. again, nice.

So if anyone is interested in the A/P I with the Moab paper, which will be pretty unique and reflects a stage in the development of this Special Edition, please let me know to put you on the “interest list”. I will be holding on to A/P I until I have completed the A/P II and into the actual Special Edition printing.

Finally, it appears that I have tweaked the tonal Hue and Saturation for the Harman FB Mp Warmtone paper for this series. I also tried the John Paul Capinigro slower printing process to have more dry time between the ink jet passes. That did not seem to make any changes to the final print apperance.

So now I have to return to my previous Master Files, reset the Hue and Saturation and pre-print on the Harman. I will then have six prints to review together and make that final decision to proceed with the other nine. Unless something really goes South, that should be a done deal.

11/18/09 Update: Second edition of In Passing is now published and available here.