My return to SoCal is a bit disrupted by all the snow in NY with my flight to JFK cancelled, so in the scramble I now have a flight from Rome to London and then non-stop to LA, BUT on Sunday. So an unplanned and extra day in Italy, sad, eh? And the sky is blue and the temperature must be in the high 60’s (F) and almost not need a coat, just a sweater. So rather than take a taxi into Roma, I decided to check out Fiumicino, a nice easy walk from my hotel.

As I blogged yesterday, Fiumicino is on the mouth of a small river that connects to the Tevere on the Tyrrhenia Sea coast, with a heavy amount of commercial fishing boats. Which means if you are looking to photograph fisherman fixing their nets or abstract net patterns, this is the place for you. I was interested in what appeared to be discarded nets on the edge of the dock, or at least it would appear so with the weeds that were growing within the netting. Then I noticed that there were men who went from pile to pile, occasionally picking some fixtures out, so now I suspect that these piles of nets were there to be recycled by those who might need a part or two.

So late in the morning I stopped at the Porchette stand for a ham sandwich and Peroni bier (beer). This stand has this smoked pig in the window and after ordering the sandwich, I watched her carve the ham right off this pig. Not bad, either, an interesting smoked & slightly spicy flavor on a rose panna (reflects the design of the bread, not the flavor), complemented by the beer. I can see where this could evolve into a foodie blog.

Okay, so I also had to stop on the beginning of my walk-about this morning for a fresh pastry (looked like an apple strudel, with raisins & soft nuts), but the guy behind the counter kept asking me if I also wanted a cappuccino. I think that was either a hint or a great sales pitch, but I had just finished one before I left the hotel, or I would have taken him up on it.

Now my son had always talked about when bumming through Europe, that they would always stop at these shops to re-fill their bottles with wine. In my travels, I never had come across any places like that until today. Son of gun, if in fact you could do just that. Almost bought a liter of Lombroso on the spot to take back to the hotel to sip on during the afternoon as I was writing this and working on another book review. But I had screwed up the last book review due to similar circumstances, so I did not really need to do that again. I will be opting for the 5pm cocktail hour down in the hotel pub later this afternoon instead.

I was also fascinated by the fresh fish market, the Pescheria. An interesting combination of odd-looking fish things, the way these were displayed and resulting patterns and the interaction of those running this shop and the shoppers. Especially this one character inside the shop who was cleaning fish, directing traffic, running a constant commentary which was occasionally interrupted by a brief & hearty song, depending on who was paying attention, all the while jestering with both hands, usually filled with a knife and some fish thing dangling between his fingers. 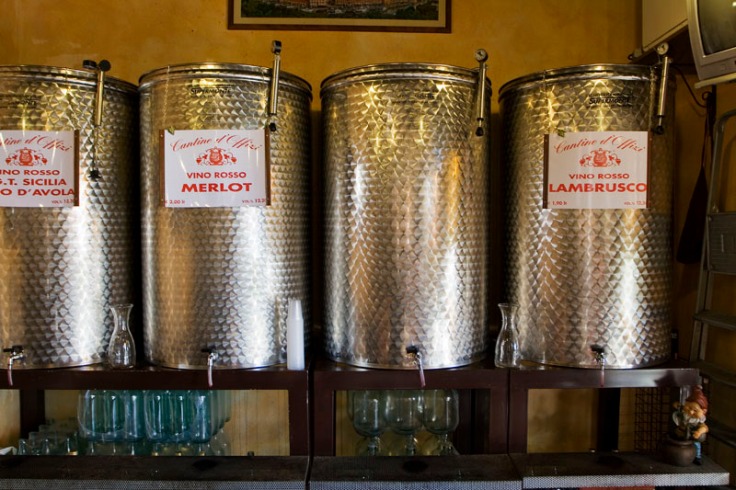 One thought on “Fiumicino Italy”