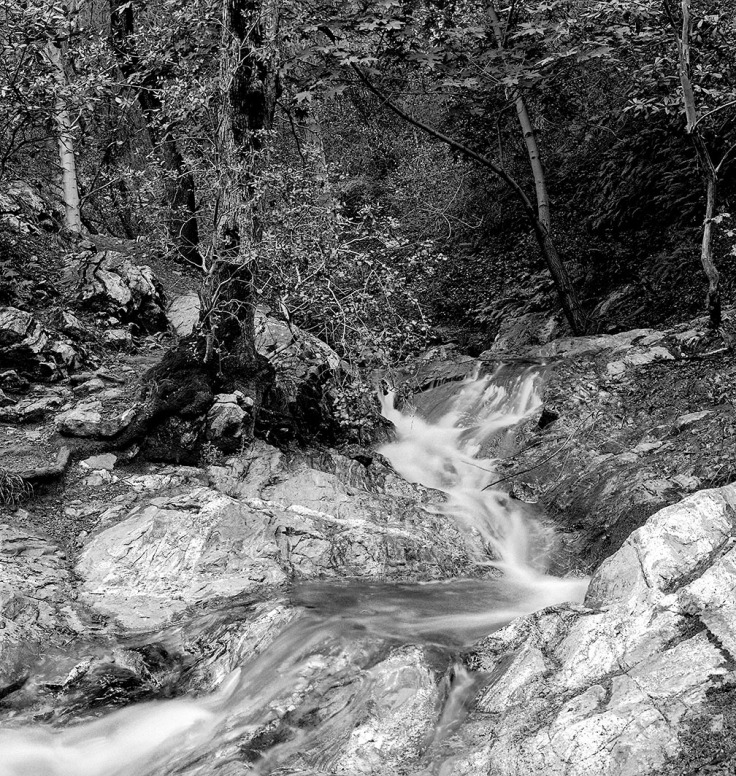 I recently discussed that I will have a series of photographic prints for sale at my gallery, Fabrik Projects, in Los Angeles. The photograph I featured in that post was from my Foundations project, Cascade, Spring, Placerita Canyon that I photographed in 2006 with the Hasselblad using Kodak color negative film. I have made a test print on the Hahnemuhle Rag Metallic and I wanted to consider this print for a little bit longer before making my final decision if I wanted to use it in conjunction with the this photographic image and paper combination. That part of my decision evolved pretty quick; this combination was looking really, really great.

Meanwhile, I noted that the earlier PhotoShop file was pretty dated from when I was using what was then my current PhotoShop CS (2003 version, as I did not upgrade to CS2) when I developed the color negative scan. Note: I was using color negative film instead of black & white film to create my black & white images because I had more control of the color conversion process to make more expressive prints.

I went back to my original Nikon scan of this negative and the scan still looked fine. I then processed the older scan file with my current version of PhotoShop CC (2019) to see if my current work flow might tweak some extra goodies from this image.

As I had anticipated; the earlier digital conversion of my Nikon scan was truncated in the highlights while having very lean dark values, having to use a Levels adjustment layer to increase the darker values and another adjustment layer to burn in the brighter values. Essentially due to this older Nikon 8000 film scanner workflow, my histogram revealed that I was bunching all of my available data into 2/3 of the curve. Nevertheless with a 4000dpi scan and a resulting 400 Meg file, there were was plenty of data to work with. Using the newer  CC Raw conversion I was able to create a full scale image while teasing more of the highlights that are getting blocked up. In a side by side print comparison of the original conversion and the new conversion the prints look subtly different, mostly in the mid and higher tonalities.

The immediate take away is that if I want to reconsider any of my older landscape work that I will need to start fresh from the film scan rather than attempt to use the older PhotoShop CS files I had created.

Second, as anticipated, printing this image larger on the Hahnemuhle Metallic really creates an interesting, and I think a contemporary spin, on this landscape photograph. At one time I was thinking about taking a Palladium printing workshop in which I would have enlarged the film image to the final negative size for contact printing, but this is looking equally intriguing. Actually it is a very stunning print.

Cascade, Spring, Placerita Canyon print will be available at Fabrik Projects beginning in September, 2019. The photograph is 14″ x 13 1/4″ on a 17″ x 22″ sheet, archival pigment print on Hahnemuhle Rag Metallic in an edition of 10. Let me know if you have any questions.

Also a reminder, I will be attending Fabrik Projects closing reception for our Summer Group Show, 4pm – 6pm, August 31st, 2019. That will be a great opportunity to discuss this and my other photographic prints.