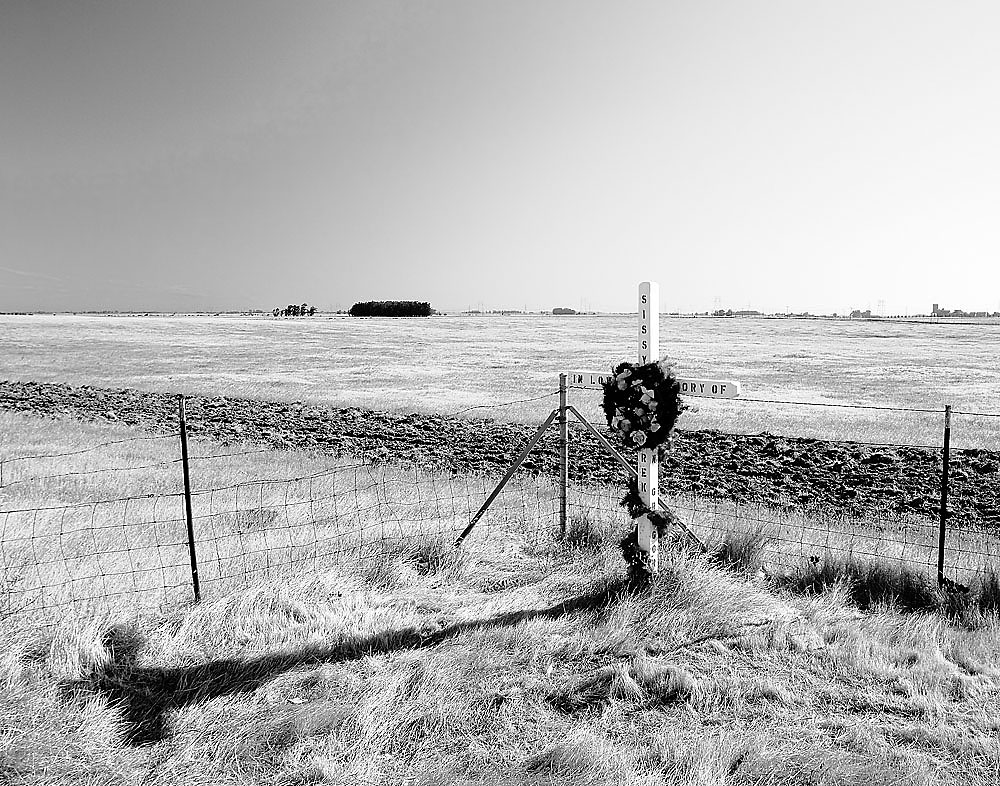 Following up on yesterday’s post perhaps a little more about how this Roadside Remembrance series is being reconsidered as a Black & White portfolio. This series of roadside memorials was starting to get a little traction in 2008 and I felt it had potential to go beyond the LensWork magazine publication as a photobook. The project at that time had a uniqueness, although I did feel that the subject did not lend itself to a posters (which the National Safety Association proved wrong) or artwork that someone might want to hang in their home. After a couple of rejected book submissions this project began to coast, as feeling a little defeated, I stopped making book submissions and became very introspective.

As a result, I “jumped the shark“, the t.v. slang for when there is a big change in a series plot, resulting in the audience losing interest and the series quickly tanks. Perhaps visualizing this series in color photographs and renaming the series working title did just that. I did learn more about myself during this transition, such as photographing my Ciociaria project in color which resulted in the publication of a book by Edizioni Punctum (Rome, Italy). I think that one aspect of my Roadside Rememberance series was visually stronger in Black & White, thus a version that I am continuing to consider.

Now I am re-examining all of my original photographs and although I will develop these as Black & White images, I have found that my interpretation has become a bit more refined. Part of which is that I have learned more about how to convert a color digital file in Photoshop to Black & White.

As an example is this photograph, Morning Cross, Central California, I had used a lens polarizer for the original exposure, but regretfully that only effected part of the morning sky. This resulted in a dramatic darkening on the left side of the sky and fading to almost white on the right side of the print, which I had found visually distracting. Now with a Photoshop Black & White adjustment layer and playing with the two blue settings, I am able to create a little more even sky tonality across the far horizon. I think the print/image retains more of the emotional impact that I had experienced and I am very happy to have revisited this image.

Btw, I think that the title of this photography is a nice play on a homophone version of morning; ‘mourning’ as it relates to what this remembrance represents, both being applicable.

One thought on “Refocusing a project”